Aqua-Fitness is HOT and HUNKY too! 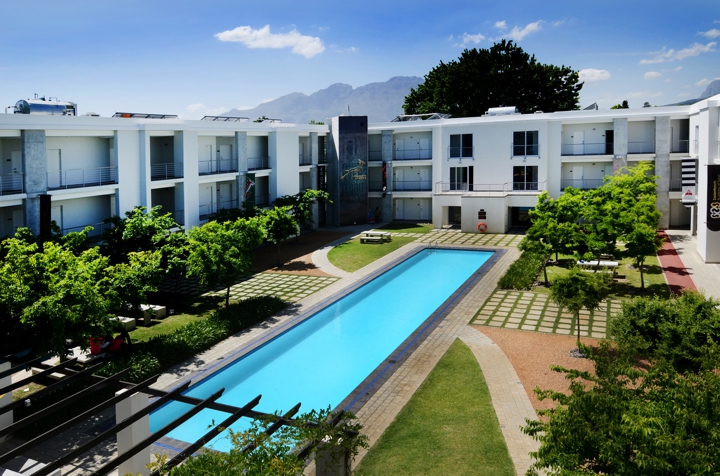 Sometimes, it's who you know... and in 2016, whilst I was running an international training course for Psychotherapists in South Africa, we happened to have a prestigious student on course, who invited me to conduct one of the 10 training weekends, at the Stellenbosch Academy of Sport.... in other words... the home of Springbok Rugby 7's and under 21 Western Province Rugby.

Now I cannot say that I am a serious follower of Rugby, but I had heard that several High Profile Swimmers, Hockey Teams, and Olympic Squads travel to this facility in South Africa during their winter season, to maintain their training schedules.... therefore one never quite knows who you will be rubbing shoulders with in the Cafeteria.

I was floating on air, as I arrived and walked through the entrance. I couldn't believe my good fortune.

But what greeted me, as I exited the entrance area... gave me goosebumps!!! A pristine 25m outdoor pool surrounded by 3 storey buildings, in the most exquisite grounds.

We eventually settled down in one of the meeting rooms; walls adorned by Western Province Rugby posters... and we got on with our day.... little did we know what a treat we were in for!

One was aware of sounds of gym equipment and chatter ringing throughout the premises... and I was engrossed in a training module, when all of a sudden there was a boom of noise... the unmistakable group water bomb into the pool! Thinking it was most likely a fun social dip, I continued... when yet again.. our senses were bombarded by a crescendo of powerful surface kicking that sounded explosive, to the point that I couldn't continue teaching... so.. what better excuse, to go out onto the balcony and see what was happening...

As an Aqua Instructor and Swimming Instructor, what greeted us was a dream come true! in excess of 20 male athletes, in their prime, (and at a guess, I would say their physiques alluded to rugby being their sport), utilising the pool for cross training!!!!

Now imagine the legs on a high profile Male Rugby player.. powered by Glutes, kicking on the surface of a pool! Just WOW!!!! And as they were holding onto the coping, we could see deltoids, Trapesius and all flexing and gleaming in the sunshine..

Yes, sounds a bit lecherous, but the genuine thrill for me was seeing the Aquatic environment being utilised by these powerful bodies, as part of their highly developed training schedule!

One of the students taking my training course, is a physiotherapist, who I believe has now qualified to train Watsu Instructors in South Africa, and she and I could discuss both ends of the spectrum of how the Aquatic environment can be utilised.

I do hope that in the near future, I will have the exciting privilege of utilising the training facilities at SAS again, but this time for candidates taking the Exercise Motivation Therapy Training Programme.